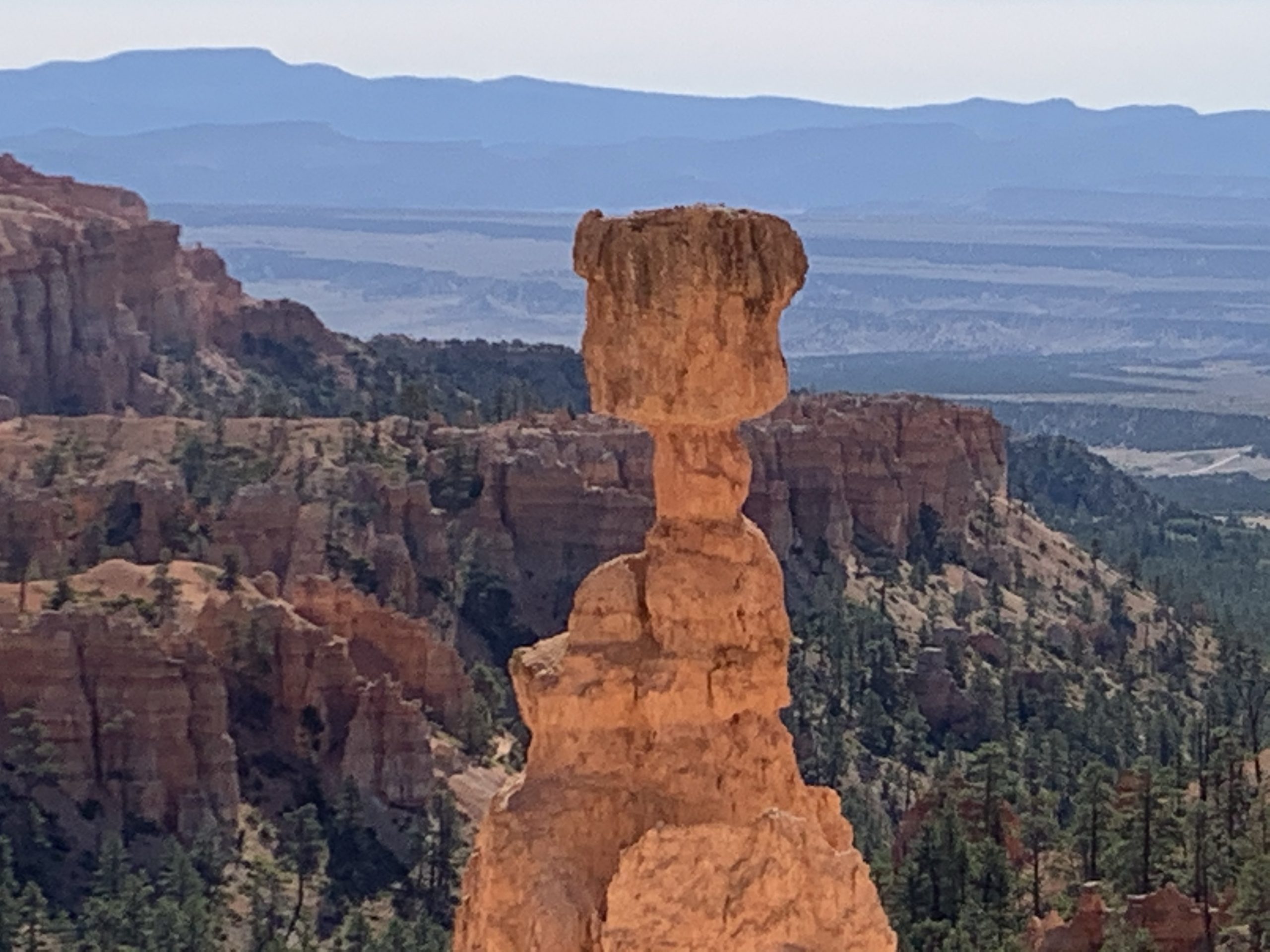 After a less than perfect sleep for me (spoilers, it would take me a couple more nights to sort out how to stuff myself into the bed in some semblance of comfort), we headed out into Bryce Canyon. The plan was to do a hike down into the canyon and then drive out to the end of the park and stop at each spot on the way back, there is one main road at Bryce Canyon and it is a out and back, not a loop.

I do love the linguistic gymnastics the Park Service went through in describing Ebenezer Bryce whose name is on the park. They described him as a “serial homesteader.”

Hoodoos are the main attraction at Bryce, and it delivers. Caused when softer stone protected by layers of harder stone are eroded away, leaving only the harder stone. That harder stone tends to compress the layers below it leaving crazy, amazing looking pillars of stone, many of which are wider at the top then bottom. Bryce is somewhat unique in that the erosion is mostly frost erosion rather than wind or water.

The hike was fantastic. We did the Navajo Trail down into the Canyon and then Wall Street Trail, which passes through a slot canyon, back up from the Canyon floor. The pictures sort of speak for themselves.

This also was our first experience with what happens when the kid gets overheated. Traveling with a 14-year old has been one of the best parts of this trip. Yes, we have had to force her to put away the phone a few times, but she has been a trooper when it comes to the hikes and everything we have been doing. Not only being there, but actually enjoying it and providing some pretty great entertainment. After one of the hikes in 108° she said, “I feel like a Costco hotdog.” But, when she does get over heated she gets very quiet, which is pretty unusual for her. I don’t think we had seen this in her before, other than maybe Kenya, but we have seen it a few time here. I will say that some cold water and a few fruit snacks later, she bounces back. So, for anyone worried about the kid (looking at you grandparents), we are taking really great care of her.

Not super crowded, but we were not alone in the park. I would say mask wearing was about 75% of the hikers we saw, only a few with dirty looks for those of us wearing masks. 100% of the rangers and park employees wear masks, and all the buildings are mask required.

We were supposed to head off to Zion National Park, but then we caught up with one of Jodi’s friends from work who was in the area, and who we enjoyed a socially distant meetup with. She and her boyfriend had just been to Zion and said it was hot and crowded.

So, rather than driving out to Zion, we found a campsite near Bryce and thought we might enjoy sunrise at Bryce.